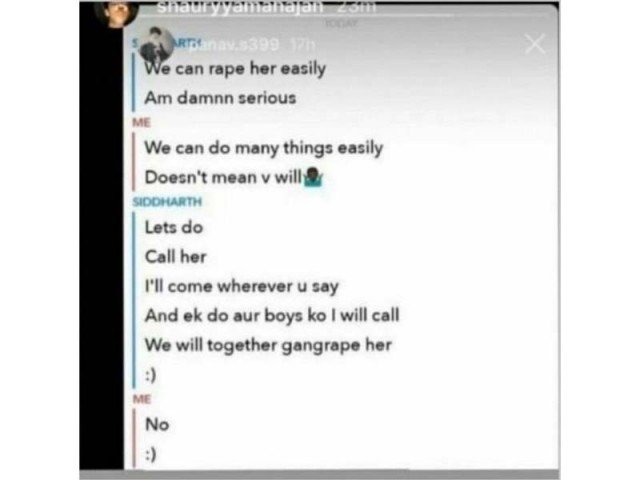 The administrator of #BoisLockerRoom, a controversial Instagram group where schoolboys discussed raping their classmates, has been arrested by the cyber crime cell of the Delhi Police.

This is the second arrest by the police which took suo motu cognisance of the happenings in the group after screenshots were shared on social media and registered a case. A 15-year-old boy was earlier apprehended after questioning.

DCW has issued notice to Instagram and Delhi Police in the matter of a group named “boys locker room” being used by some miscreants to share objectionable pictures of minor girls and planning illegal acts such as gangrape of minor girls.All the people involved in this act should be immediately arrested and a strong message needs to be given out. #BoysLockerRoom

Investigators said the group had 22 members in all, and two of them were adults studying in colleges. At least 20 of them are studying in at least four prominent schools in Delhi-NCR, they further said.

On Tuesday, 10 members were questioned over phone.

The devices of the identified members of the group have been seized and sent for forensic analysis.

The cyber crime unit has asked for information about the alleged group and its members from Facebook-owned social networking platform Instagram. Their reply is awaited, an official said.

The role of other members is being ascertained, said investigators.

The content on the group included a remark by one member who suggested collecting a group of boys to gang rape a classmate, and several photos of schoolgirls that were accompanied with texts objectifying them. There were also copies of photos posted by girls on Instagram that were then appended with lewd and violent remarks.

The conversations were exposed after one of the boys in the group took screenshots and passed it on to someone else, said the officer, before it was posted on social media by one of the girls who was targeted.

Thread: Students who are 16, 17 years old, are casually talking of gang raping girls and women, swapping nudes without the consent of these women on Reddit, with not even a hint of fear of exposure. The dire crisis of rape womxn face, starts with this rape culture #boyslockerroom

The police have invoked sections of the Information Technology Act and the Indian Penal Code dealing with the distribution of pornographic content and making objectionable remarks about women.

On Monday, authorities of one of the schools – where the whistleblower student studied – filed a complaint with the Delhi Police. “Once the screenshots emerged in the public domain, the group was deleted and another one created. Some girls were added in the new group to mislead police,” said an investigator.

The original group was created in early April, the investigator quoted above said.