Actor Ankita Lokhande took to Instagram to share an emotional video of her pictures with Sushant Singh Rajput. Says “this was a good journey”

On Sushant Singh Rajput’s death anniversary, actor Ankita Lokhande took to social media to share an emotional video of the late actor. The video montage consists of pictures of Ankita Lokhande and Sushant Singh Rajput. The video has emotional music playing in the background, as it starts and ends with pictures of the two actors hugging each other.

Sharing the 4-minute long video on Instagram, she wrote “14 June 💔 This was our journey !!!!
Phir milenge chalte chalte✋.” The video has garnered sympathetic reactions from her followers who took it to the comments section to remember the late actor. While many simply noted their reaction with sad emoticons, a few penned emotional notes for Sushant Singh Rajput. 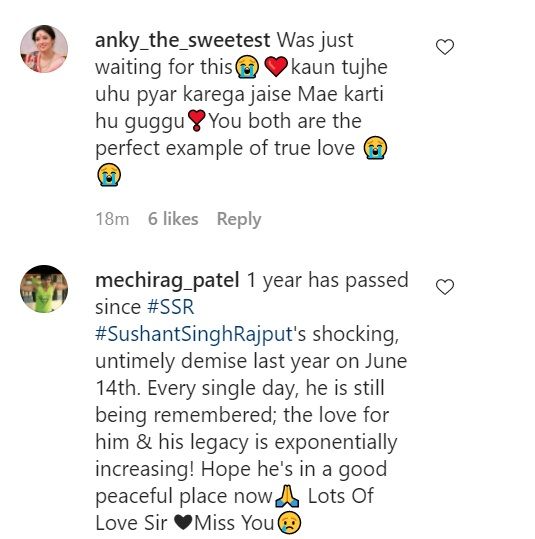 Ankita shared the video with chants of ‘Om’ playing in the background. The actress who was on a 10-day break from social media returned to social media before Sushant’s death anniversary. She posted photos with her boyfriend Vicky Jain as they stepped out in Mumbai to enjoy the beautiful weather. She also spoke about ‘distance’ while also gushing about her relationship. Ankita has also opened up about her bond with Sushant on a couple of occasions.

Earlier this month, Ankita marked 12 years of Pavitra Rishta, the television show that brought Sushant and her together, and spoke about the late actor. “Sushant always taught me acting. I wasn’t an actor. He was the one who used to teach me what is acting. Because I was a junior, he was a senior. He always taught me. He was a brilliant actor, brilliant co-star and I was very fortunate to work with him,” she said during an Instagram live session with fans to celebrate the milestone. Soon after, Ankita had announced that she was taking a social media break. She shared a post on Instagram which read, “It’s not a goodbye, it’s a see you later.”

The post was shared on Ankita Lokhande’s Instagram on June 3, the day Sushant had shared his last-ever post on Instagram for his mother. This is amid the mixed reactions from fans of Sushant, as some have praised her for speaking in the ‘Justice for SSR’ movement, seeking to know the truth over Sushant Singh Rajput’s death, while others who have trolled her for posting ‘happy’ posts when the momentum of the movement lost steam.