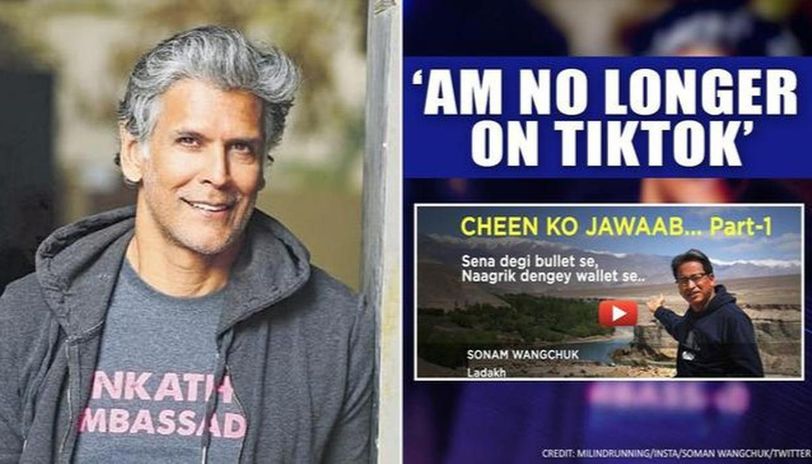 Milind Soman, who enjoys a huge fan following social media platforms, has quit Tiktok in a move to boycott Chinese products in India.

Actor and supermodel Milind Soman, who enjoys a huge fan following social media platforms including Tiktok, has quit the video sharing application in a move to boycott Chinese products in the country. Drawing inspiration from education reformer Sonam Wangchuk, who encouraged the citizens to drop the use of Chinese software “within a week”, Milind Soman announced that he is ‘no longer on Tiktok.’

The video sharing application has the highest number of users in India. As per a study conducted in June 2019, there are more than 120 million Tiktok users in the country. Milind Soman has a powerful voice on social media and the move can inspire many to follow his suit. If many Indians quit Tiktok, Wangchuk believes it has the potential of burning a hole in the Chinese firm’s pocket.

He advocated that Indians should start boycotting Made in China goods, arguing that the Chinese will feel the pinch harder on “their wallet” than on the border “with bullets”. Speaking to Republic TV on Friday, Sonam Wangchuk said the Chinese actions on the border with India are a result of domestic dissatisfaction over the Chinese government’s handling of the COVID-19 crisis.

He encouraged people to drop the use of Chinese softwares “within a week”, like the video sharing platform Tik Tok. Sonam said Indians have the freedom to choose what they spend on with their wallet and if a country doesn’t treat India fairly then they should use boycotts as “personal economic sanctions”.

“We should uninstall all their apps that make their (Chinese) companies rich. That money goes to make bombs and bullets to point at our borders. So first uninstall their apps. Then we should vote out hardware like electronics, clothes, and machines slowly over a year. This signal, first from India and then the rest of the world will hurt China which will affect their economy,” Wangchuk said.

Sonam Wangchuk went on to suggest that Indians need not depend on cheap Chinese products and look for domestic alternatives.