The man with the golden arm Neeraj Chopra pegged a score of 87.58m in his second attempt only, which paved his path to golden glory at the Tokyo Olympics 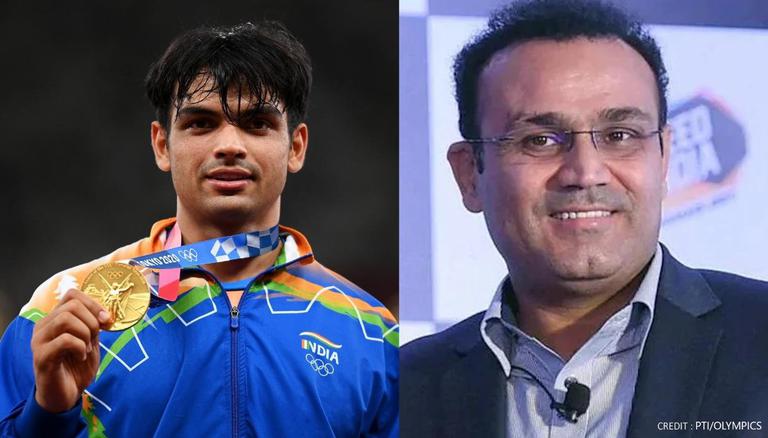 Ending India’s campaign in Tokyo at the highest note possible and the century-long wait for a podium finish in athletics, Neeraj Chopra bagged a Gold medal in the Men’s Javelin Throw event on Saturday. The man with the golden arm pegged a score of 87.58m in his second attempt only, which paved his path to glory. As Chopra hurled the Javelin, billions stayed glued to their screens, breathing in unison and holding their nerves, even as an intense England vs India Test match featuring the likes of Virat Kohli and Rishabh Pant played parallelly.

During the nearly half-an-hour long competition, all eyes were on Tokyo and Neeraj Chopra and surprisingly, the ‘most favourite’ sport in India was completely eclipsed. Pertinently, the India vs England Test match, which has now entered its fourth day has been overshadowed by India’s historic run at the Tokyo Olympics. Ravi Dahiya’s silver, Bajrang Punia’s thumping victory, and the Women’s Hockey Team’s valiant fight have seemingly dominated and eclipsed the ongoing cricket match, producing a sight never witnessed before.

Providing a testament to the same, former Indian cricketer Virender Sehwag, who himself managed to hog the spotlight when he came on to bat, said that he ‘forgot’ about cricket as India’s Olympic superstars put on a groundbreaking show in Tokyo. Tweeting moments after Neeraj Chopra’s victory, Sehwag quipped, ‘cricket gaya tel lene,’ which loosely translates to, ‘cricket was forgotten completely’. The once explosive opener asserted that the Tokyo Olympics have marked a ‘paradigm shift’ in the interest of the general public from cricket to other sports.

Goosebumps…
An India test match going on & the way we were glued to our screens to cheer for Kamalpreet,Ravi ,Bajrang,Sindhu & #NeerajChopra today, this @Olympics marks a paradigm shift in interest towards other sports, in these few moments truly felt Cricket gaya tel lene. pic.twitter.com/LWjFf5UzX1

Sehwag’s tweet echoed the sentiment of his former teammate Gautam Gambhir, who days ago opined that the Indian hockey team’s bronze win in Tokyo is more significant than India’s World Cup wins. Interestingly, Gautam Gambhir himself was instrumental in leading the Indian Cricket Team to two of the three World Cups that the Men in Blue have won. Moreover, these recent comments by Indian Cricketers add weightage to the ongoing debate as to whether India’s passion for Cricket has overshadowed the incredible accomplishments in other sports, or put those sports at a disadvantage.

Neeraj Chopra gets the Gold
12 competitors, including the dominating forces from the Czech Republic and Germany, tried their best to breach the 87.58 metre mark set by the 23-year-old from Sonipat. However, the Indian Army JCO had set a mark, which was out-of-reach for even the best of Javelin throwers, including Germany’s Johannes Vetter who has the second-longest throw in the history of the sport. In the first round, Neeraj Chopra broke his qualification record and his throw was 87.03 m, the second throw was 87.58m, and the third throw was 76.79m. Czech Republic throwers Jakub Vadlejch (86.67m) and Vitezslav Vesely (85.44m) took the silver and bronze respectively.

It's a first gold medal at #Tokyo2020 and a first ever athletics gold for #IND pic.twitter.com/qF4BIXSK93

Significantly, Chopra’s gold took India’s medal tally to 7, which is the country’s highest count at the Summer Games. Apart from the Javelin thrower, India won two medals in Wrestling, courtesy of Bajrang Punia and Ravi Dahiya. PV Sindhu etched her name in history books with a bronze win in badminton whereas the Men’s Hockey team ended a 41-year-long medal drought with a bronze finish. Lovlina Borgohain and Mirabai Chanu won a medal each in boxing and weightlifting.