In The News Travel
0

Phang Nga organized a welcome parade this week, to greet the first foreign tourist couple from the Phuket Sandbox project who have traveled on to Khao Lak.

At La Vela Khao Lak Hotel, Bang Niang Beach, in Khuk Khak subdistrict, Phang Nga province, Mr. Chamroen Thipphayaphongthada, Governor of Phang Nga, welcomed the first tourist couple visiting under the Phuket Sandbox project. The couple stayed in Phuket for 14 days before traveling to Khao Lak, Phang Nga. They were welcomed with a Tom-Tom parade and were granted garlands and souvenirs from the Tourism Authority of Thailand. They also joined a group photo session before checking into the hotel.

The British couple was among the first batch of foreign tourists who arrived in Phuket on July 1 and booked a stay in Khao Lak from July 16-25. They will later return to Phuket to fly back to England. 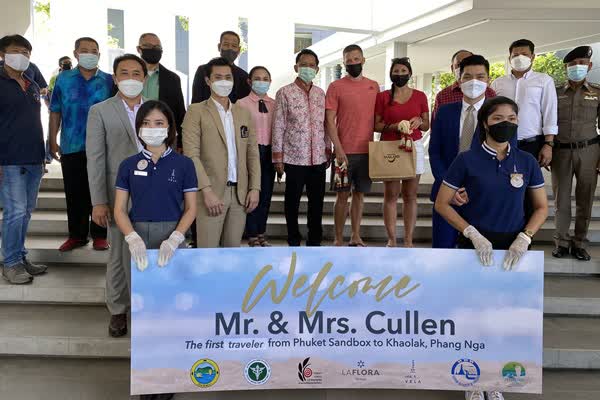