Sushant Singh Rajput’s death was ‘not a suicide’, wrote Shekhar Suman on his 1st death anniversary while SSR’s friend Ganesh Hiwarkar was ‘detained’ in Delhi. 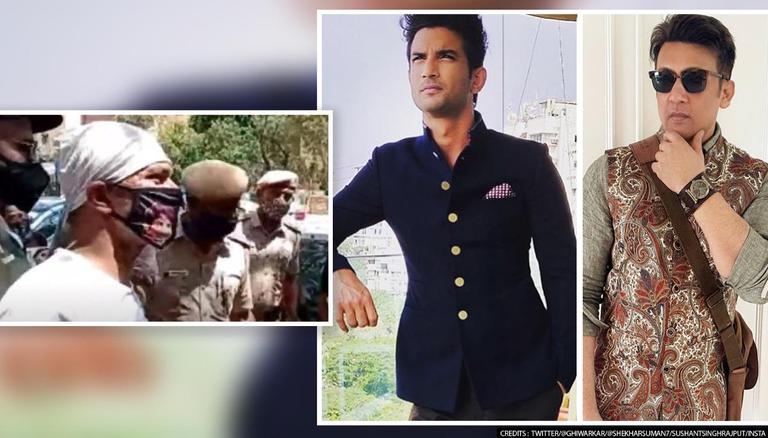 It was an emotional day for fans of Sushant Singh Rajput as the actor’s death completed a year on Monday. While tributes poured in for SSR from netizens who hailed his achievements and talent, many raised questions over his mysterious death. Shekhar Suman and choreographer-friend Ganesh Hiwarkar, who have been alleging foul play in the death since a year, were among those in the latter category as they demanded ‘justice.’

Sharing that he remembered Sushant every day, Shekhar Suman wished Sushant ‘eternally shines like the brightest star” and that stay forever in the hearts of  his fans. The actor stated the void he felt behind was ‘difficult to fill’.

The Movers & Shakers star requested the agencies to speed up the investigation process into his death and bring a ‘closure’ to the case so that Sushant’s soul ‘rests in peace.’ He expressed his discontent that they ‘fought and fought’ and that they were looking back in ‘anger, frustration’, as all of it went in vain. 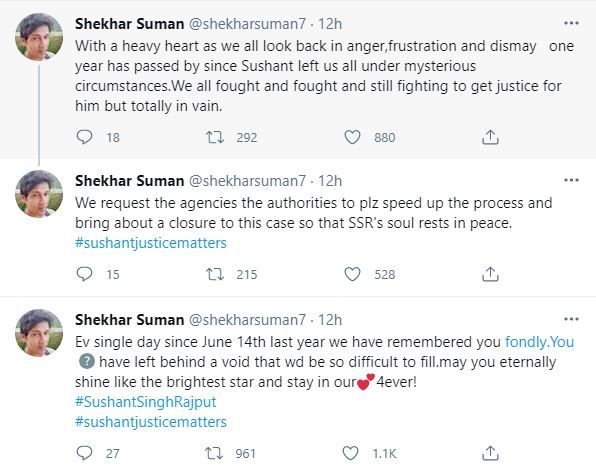 Shekhar Suman called Sushant as a ‘courageous and an extremely talented loving caring man’, adding that he had died due to the ‘ pressures and norms of the society establishment and relationships.’ Using terms like ‘Justice for SSR’ and ‘Sushant justice matters’, he alleged that SSR was ‘brutally murdered.’ He asked why the culprits were still roaming scot-free and there was no closure. 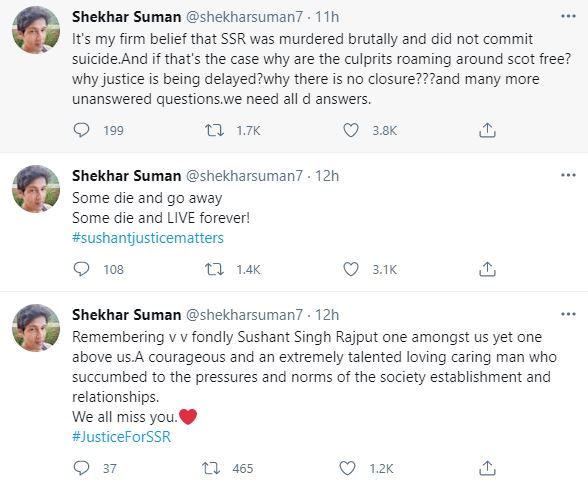 Meanwhile, SSR’s friend, Ganesh Hiwarkar, who has participated in numerous protest events for ‘Justice for SSR’ movement over the past year, visited the office of the CBI, that is investigating Sushant’s death, in Delhi. He went live on Twitter and YouTube and had numerous ‘SSRians’ with him, as they protested and raised slogans, while asking an update on the probe.

While the initiative was to get an update from CBI, the agency finally issued a statement on Monday, that they had not closed the case and continued to look into all angles.