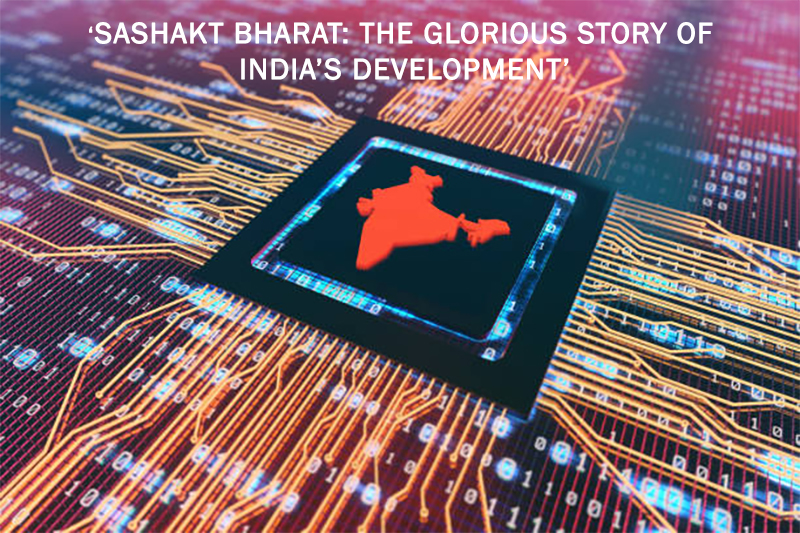 This year is special for India as we are celebrating Azadi Ka Amrit Mahotsav; commemoration of the 75th Anniversary of India’s Independence. The Mahotsav is being celebrated as a Jan-Utsav in the spirit of Jan-Bhagidari. The Prime Minister said that India’s achievements are giving hope to humanity in its entirety and added that her developmental will provide momentum to the development journey of the whole world.

India is a nation on the move. It is evolving and progressing along multiple axes at a very rapid rate. It is on the cusp of a major transformation. India has regained its position as the fastest growing large economy in the world. This is highly commendable. However, to meet the rising aspirations of our young population, India needs to achieve and sustain a high rate of GDP growth for the next three decades. There will be several milestones in this long and arduous journey.

Today, India is one of the most open economies in the world with a transparent and predictable tax regime. We have implemented the Goods and Services Tax – our biggest tax reform since independence. We are rapidly improving and creating infrastructure for railways, roads, ports and airports. We have created a National Infrastructure Pipeline to provide world-class infrastructure.

We are a country with global interests. We have one of the largest and most able Diasporas. Our economy, and therefore our material well being, is plugged on to global supply chains. We are a powerhouse in the services sectors. We look at the world as a borderless economy with an interlinked marketplace. The Modi Government has launched several historic reforms to improve the ease of doing business in India in the last several years. India has now emerged as one of the top destinations for foreign investments.

We have greatly liberalized our FDI regime and opened up previously restricted sectors such as space, defense and atomic energy to greater private participation. We have implemented groundbreaking reforms in the agriculture sector. The Government has also recently launched Production Linked Incentive schemes for several sectors including mobile & electronics, medical devices and pharma. More such schemes in other sectors will follow in the coming days.

The Digital India programme is creating a knowledge economy through universal provision of digital infrastructure and platforms for cashless economic transactions. The JAM trinity – Jan Dhan – the world’s biggest financial inclusion initiative; Adhaar – again world’s biggest biometric project; and Mobile connectivity – pioneered by this government – has set the stage for a fintech revolution in India.

The pandemic has focused our attention on improving and augmenting our healthcare systems. In India, the Government had earlier launched Ayushman Bharat – one of the world’s largest health insurance initiatives. The Prime Minister also launched the National Digital Health Mission with the aim of providing efficient and affordable healthcare to our people through digital tools. With annual growth of over 22 per cent, the healthcare sector in India has become very promising for investments and joint ventures.

In building our renewable energy capacity and in keeping with our climate change commitments, the Prime Minister has focused on solar energy. He has spoken about “One Sun, One World, One Grid” to leverage solar energy. India has done exemplary work in the renewable energy sector and has played an instrumental role in the formation of the International Solar Alliance. Similarly, India’s success in the wind energy sector has been noted globally. Of course, conventional energy as well as hydropower will continue to pay a dominant role in our energy mix for some time to come. The Prime Minister has also emphasized the message of LIFE or lifestyle for environment through sustainable living and consumption patterns powered by a global movement of Triple-P or Pro-Planet People.

Many of the flagship initiatives of the Government of Prime Minster Narendra Modi have been designed to promote the well-being of society. The Swachh Bharat Mission, increased spending on programmes like MGNREGA is enhancing employment generation to rejuvenate the rural economy, Aadhaar, with its present reach of over 110 crore people, is helping in direct transfer of benefits, plugging leakages and improving transparency.

Initiatives like Start-up India and Atal Innovation Mission are fostering innovation and new-age entrepreneurship. ‘Smart Cities’ program has the vision of our Prime Minister to renew and develop more than 100 cities across the country through sustainable, state of the art and modern technologies. It is an initiative to drive economic growth and improve the quality of life of people by enabling local development and harnessing technology as a means to create smart outcomes for citizens.

Our young and thriving population can be the pivot of our growth if empowered through skills and education. Under the leadership of our Prime Minister, India has launched a Skills India Campaign with the aim to skill and train over 400 million people in India by the end of this year. The onus is on us to create an enabling environment for our youth to grow and contribute productively to the future. The Indian government also places great emphasis on the need to transform India into a globally competitive manufacturing hub powered by ‘Skill, Scale and Speed’.

To achieve this, the government is setting up world class investment and industrial regions, particularly along Dedicated Freight and Industrial Corridors spanning the country. In addition, to increase India’s share in global trade, the government is simplifying procedures and strengthening trade infrastructure to reduce transaction time and costs. PM GatiShakti shall guide ‘big public investments’ for modern infrastructure to be benefitted by the synergy of Multi-Modal Approach.

We do not, however, live in a moral vacuum. The international environment has become challenging as the world grapples with the consequences of Covid-19 and a state of global uncertainty.

To deal with the economic challenges posed by the pandemic and bring our economy back on track, Prime Minister Narendra Modi has enunciated a forward-looking economic approach under the rubric of Aatmanirbhar Bharat Abhiyaan. The stimulus package of nearly USD 270 billion (Rs 20 Lakh Crores) launched by the Prime Minister under the Abhiyaan aims to both reinvigorate the economy and provide a social safety net to our vulnerable sections. Over the entire period of the pandemic, Government has extended food support to as many as 800 million of our citizens. The vision of Aatmanirbhar Bharat, as the Prime Minister said, will stand on five pillars of: economy; infrastructure; our system driven by technology; demography; and demand. Achieving rapid growth and development will depend substantially on successful integration and assimilation of all of these factors.

India’s aspirations are not just material in nature. India has been a constructive actor in developing an international system that is human-centric. We have worked together with partner countries in sharing our developmental experience. We have undertaken humanitarian assistance and disaster-relief operations over a geographical area spanning from the Pacific to the Atlantic. We have assisted a number of our friends and partners during the current pandemic. We have been a net security provider.

Right from the beginning of the pandemic, India has been committed to sharing its experiences, expertise and resources with the global community. Under the Prime Minister’s able leadership, India was able to turn the Covid-19 crisis into opportunity. At the extraordinary summit of the G-20 convened by Saudi Arabia to discuss the COVID-19 pandemic, Prime Minister Modi underlined that COVID had demonstrated the limitations of the existing international system. Rather than being a purely economic agenda, he called for a new template of ‘human-centric globalization’ based on fairness, equality and humanity in the post-COVID world. In line with the Prime Minister’s vision of placing humanity at the centre of global prosperity and cooperation, India went out of its way to be a net provider of health security. India lived up to its reputation as the pharmacy of the world by supplying medicines and COVID vaccines to countries all over the world.  In doing so, the country delivered on the Prime Minister’s commitment at the UN General Assembly to make Indian manufactured vaccines affordable and accessible to all of humanity.

We have been guided by Prime Minister’s vision of ‘One Earth, One Health”. We have conducted online training sessions for our neighbouring countries to develop capacity in clinical trials and clinical practices.

Over two-thirds of India’s Lines of Credit in the past decade have been offered to African countries. India offers support to infrastructure development and institution building to countries in South and Southeast Asia and Africa and other developing regions, spending over US$ 1 billion annually on development partnership activities. Through its technical assistance programmes, India extended training opportunities to nearly 10,000 persons annually from 161 countries in diverse disciplines conducted by 47 institutions.

Additionally, India also offers 2300 scholarships to students from other developing countries. Some of the support that India extends to fellow developing countries includes sharing of its capabilities and capacity-building support in high technology areas such as remote-sensing and space applications for disaster-risk reduction.

The Prime Minister underscored the need for reorienting globalization to focus more on human welfare in the post-COVID world. He also highlighted how global initiatives such as the International Solar Alliance or the Coalition for Disaster Resilient Infrastructure launched by India in the last few years have been aimed at fostering a more human centric international system.

The Prime Minister has referred to the next 25 years “from India @75 to India @100” leading up to our 100th anniversary as Amrit Kaal. This is a period for collective efforts of the 130 crores people of India to see India realize its fullest potential.

The President of India Smt Droupadi Murmu, also reiterated PM’s vision when she spoke of India’s strong democratic credentials in her Independence Day message to the citizens of the country. Hailing India’s rich democracy, she stated that it not only grew roots in this soil, it was enriched too. India is a vibrant and resilient democracy which will carve her developmental story in the next 25 years as it enters the Amrit Kaal.

As India prepares to preside over the G20, one of the most influential groupings in the world, we are looking to lead by example. India has not only proven its resilience in the face of COVID-19 and other daunting challenges but has emerged stronger and better prepared to meet the future. In this process, India will continue to play a constructive role in developing an international system that is human-centric. We believe not just in “Vasudhaiv Kutumbakam”- our world is one family – but also in the principle of ‘Nishkama Karma’, that good needs to be done for its own sake.

[The writer is Chief Coordinator of India’s G20 Presidency and former Foreign Secretary of India.  The views expressed here are his own.]