Sushant Singh Rajput starrer Dil Bechara, his last film, has created history in just a few hours of its release. The movie has become the highest rated Indian film of all time on IMDb.

Sushant Singh Rajput died by suicide on June 14 and since then, his fans and movie buffs around the world were eagerly waiting for Dil Bechara’s release, his final film. The fans were quite eager to watch the film for over a month and they finally got to witness Sushant Singh Rajput’s magic on their screens, one last time, as the Mukesh Chhabra directorial premiered online yesterday everning at 7:30 pm.

The movie is receiving a lot of love from the audience and so is Sushant Singh Rajput’s performance as Immanuel Rajkumar Junior aka Manny. While it received rave reviews, the audience is going gaga over it. And within a few hours of its premiere, the movie has created history. The Hindi adaptation of John Green’s 2012 novel, The Faul in Our Stars has become the highest rated Indian film of all time.

With over 20 thousand votes, Dil Bechara currently has the rating of 9.8 on 10. This puts the movie miles ahead of the second best in the list, Kamal Haasan and R Madhavan’s 2003 Tamil film Anbe Sivam.

Check out the screengrab of the IMDb rating of Dil Bechara below: 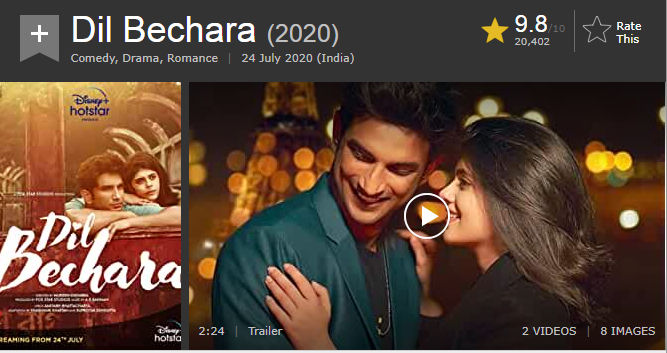 @geneliad is all hearts as she watches Sushant Singh Rajput on screen for one last time❤❤ . . . #geneliadeshmukh #sushantsinghrajput #dilbechara